Mizuno’s Wave sole commits every available gram of weight low and towards the face, dropping spin rates for even the fastest, downward ball-strikers. This first Wave sole in a driver also allows the ST180 to contract and expand on impact, increasing energy imparted to the ball. With a new Forged SP700 Ti Face, the ST180 accelerates ball speeds noticeably past is predecessors.

“This was the biggest shock we’ve had in testing,” says Jeff Cook, Mizuno’s US PGA Tour manager. “The spin rate and ball speed of this driver caught everybody out. The ST180 comes off so fast, with so little spin. It’s going to make a lot of good players question what they really need in a driver.” Sharing many of the attributes of the ST180 driver – including an Amplified Wave Soleplate and efficient, low-spin design – the fairway woods complement the ‘big stick’. The flatter, more efficient flight keeps the faster, high energy 1770 Maraging Steel face under full control.

Like the driver, the ST180 fairway offers a Quick Switch Adjustable Hosel, which allows four degrees of loft adjustment and three degrees of lie adjustment to match each golfer’s unique launch and visual preference. Also like the driver, an expanded line of high-end shafts can be fitted without additional charge.

“If you like a wider, larger-looking profile, but don’t necessarily want a high-spinning flight, the ST180 is a really interesting option,” Cook says. “Over the years a lot of our tour players have bucked the trend for smaller fairway woods and this plays nicely into their hands.” With an eight-way adjustable hosel, the CLK hybrid can be precisely set to fill the distance gap between your longest iron and shortest fairway wood. Mid and slow swing-speed players have the option of putting up to four CLKs in play, creating a wider distance span at the longer end of the bag.

“We all play our CLKs a little differently,” says Bill Price, Mizuno’s custom fit manager. “With faster ball speeds, we’ll tend to slot them in before a 3 or 4-iron. For mid and slow swing speeds, two, three of even four CLKs in the bag become a great way to maintain some yardage gaps.” Sculpted by the company’s Yoro master craftsmen, the MP-18 is a throwback to the musclebacks of Mizuno’s past. A shorter blade length, cambered top line and steep progression into sharp, compact wedges are the marks of Mizuno’s iconic clubmakers and are grain-flow forged in Hiroshima, Japan, for the most colourful feedback imaginable.

“We significantly shifted the balance of science and art with the MP-18s,” says Chris Voshall, Mizuno’s senior club engineer. “You can instantly notice a greater input from the master craftsmen in that the MP-18 is more like the blades that made Mizuno famous – just more precise in its flow and manufacturing. At impact, this is just about perfection.” 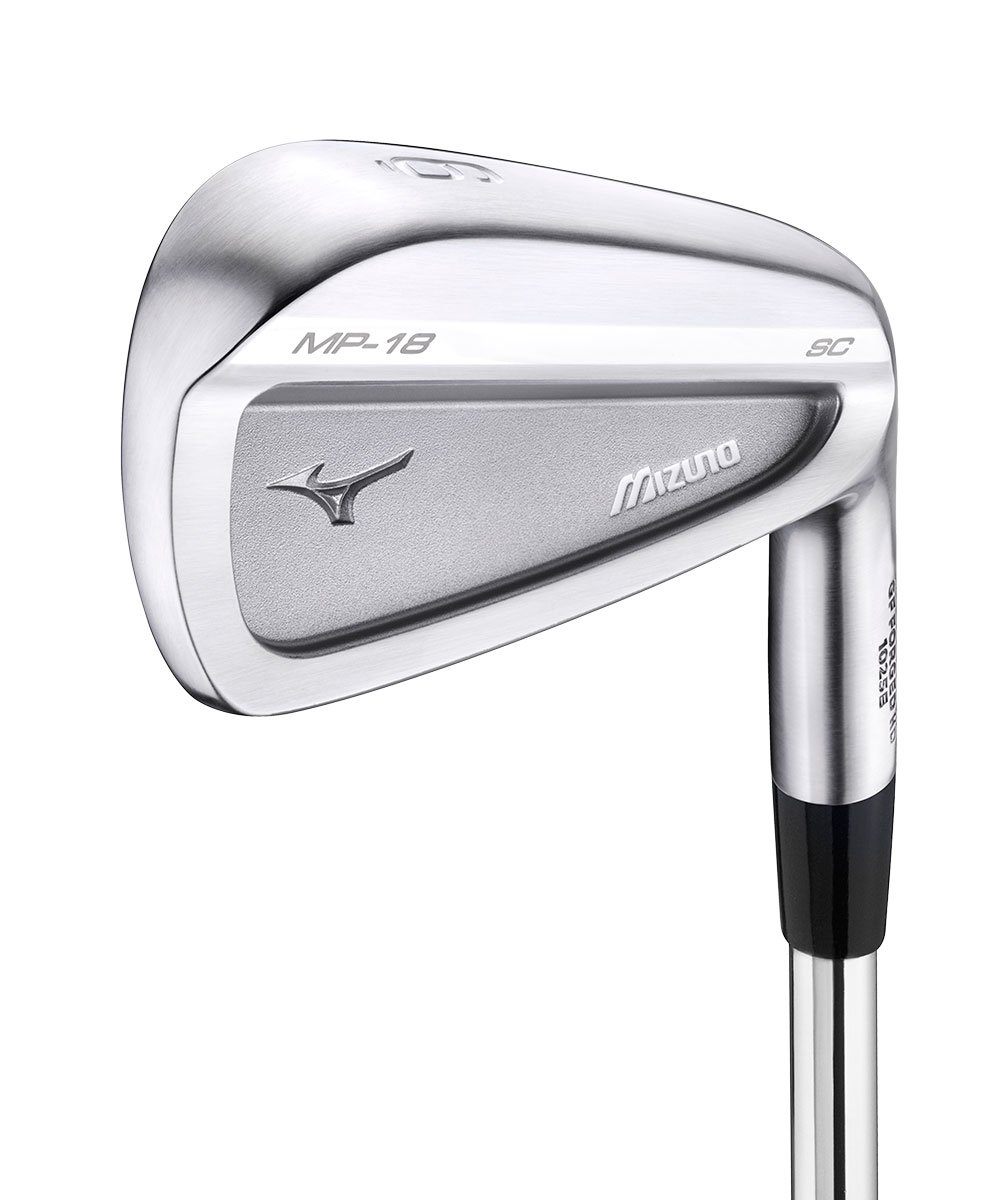 The new MP-18 SC is a compact cavity back – sensitively reworked by the same master craftsmen who created multiple Major-winning iron sets. A slightly wider, cambered sole makes this more playable than the muscle back. The thin, tapered top line, short head length and smaller wedges mean this is very much a tour-ready iron. Grain flow forged in Hiroshima for the most colourful feedback through impact.

“The MP-18 SC is an iron that combines a lot of practical needs – stability, workability and softness at impact with our craftsmen’s desire for immaculate looks over the ball,” says Voshall. “Although the sole is a little wider than the muscleback, from every playing position, the two models blend beautifully as a mixed set. The MP-18 SC wedges don’t taper off as dramatically in size as the muscle back – so between the two models better players will find something that suits their eye.” These irons are the result of a three-year project lead by Mizuno’s Yoro master craftsmen to develop a highly stable, forgiving multi-metal construction iron that satisfied their aesthetic demands at address. Even with both lightweight titanium and heavier tungsten parts sealed within its 1025E mild carbon steel head, the MP-18 MMC maintains a similar tour-ready profile and size to the MP-18 SC.

“The MP-18 MMC is the first multi-material MP iron built in the vision of our master clubmakers – which set standards for looks and aesthetics that this kind of multi-metal construction typically prohibits,” says Voshall. “It extended our normal two-year development cycle by a full year but raising the bar that little bit higher delivered a landmark iron.” The finishing touch to an MP-18 set, the long iron replacement now used by every Mizuno tour player. A higher-flying option with steeper landing angles, engineered with a profile acceptable to Mizuno Yoro master clubmakers. The sleek new profile now envelopes a maraging steel face, tungsten toe weight and internal pocket for enhanced ball speed and ease of use.

“The Fli-Hi is very much a fixture on tour now – even the most classically minded players have converted to the No.2 and No.3 iron replacements. These are worlds away from heavily offset, game-improvement hybrids – but much easier than a traditional long iron to flight and land in firm conditions,” says Voshall.