Drop three putts in a row over 20 feet, and what can anyone say? Other than maybe you had a strong feeling each was going in, probably not much. But I recently hit upon a term that, at least, begins to describe what I feel when I’m putting great: blackout.

When I’m in “blackout”, I have zero thoughts about my setup or stroke. I’m not even thinking about speed. There’s no challenge in my stance, no body parts pushing for position. I just step in and I’m immediately comfortable. All I see is the arc of a putt with enhanced clarity. Say, the gentle swoop of a 12-footer that breaks a foot. The blur of the ball’s path and that path alone burns in my mind – nothing else. My stroke is simply a reaction to make that path come alive, to come to be, with the roll of the ball.

Now all that might sound goofy. It’s a hard thing to explain. What I can state clearly is, I’m not always in blackout, as much as I wish I were. And as effortless as I might make it out to be, it takes work and preparation to get in that mode. I make no guarantees, but I can show you how I’ve been able to get there. Maybe you can, too. 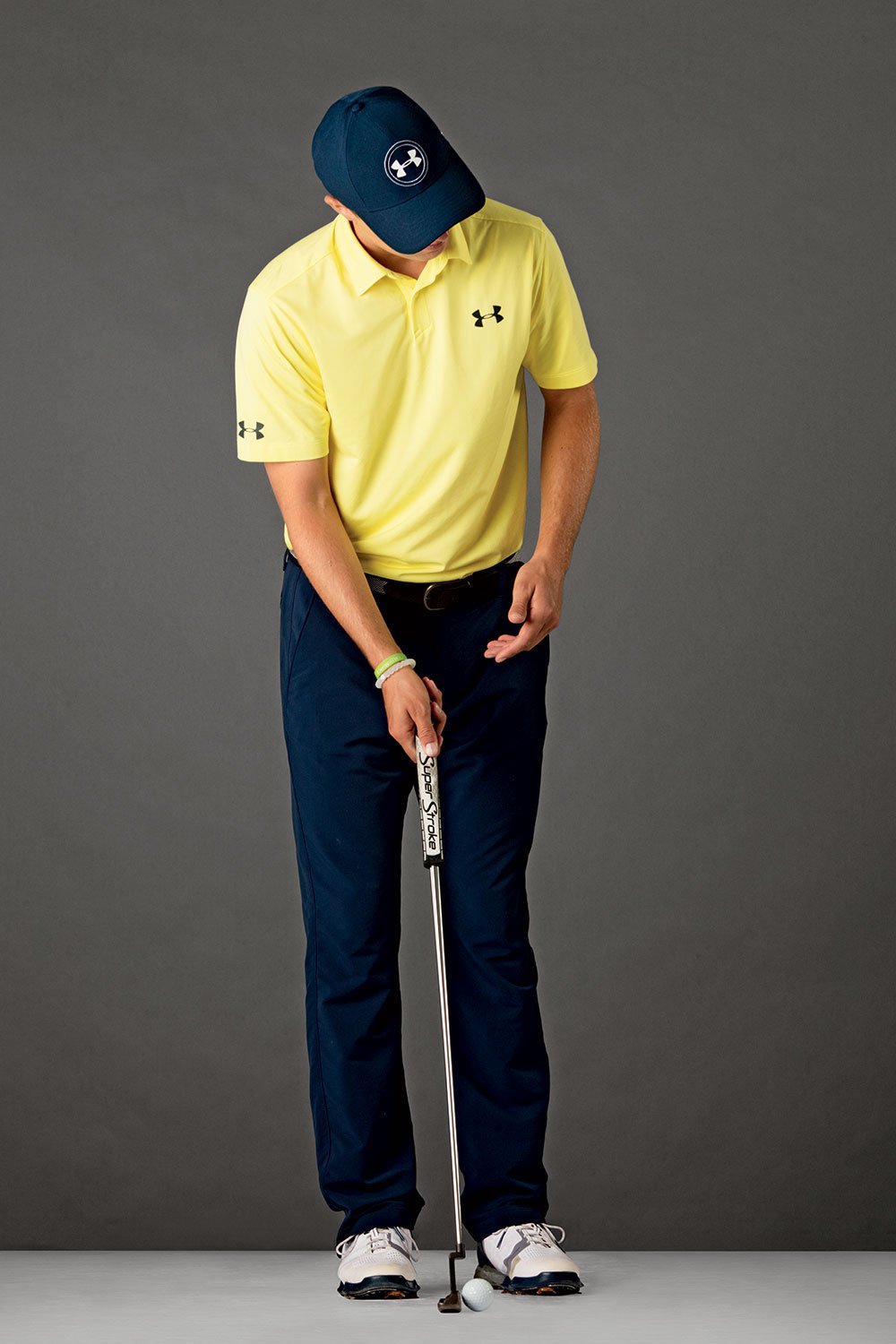 When I read a putt, it’s anything but blackout. I’m paying sharp attention. It’s a three-step process: first, I look from behind the ball to determine the line. Second, I walk along the low side of the putt to gauge the speed because it’s easier to see the slope. Third, I walk behind the cup, where I can then judge the line from another perspective. When I’m confident about my read – I know where I want to start the putt and what kind of speed I want to put on the ball – I step in. I always walk in from behind square to the line, holding the face of my putter in my left hand lightly like I am on page 156. It’s  my habit. Stepping in the same way every time, whatever it is you do, is the one thing you can have total control over if you bother to make the effort.

It’s no secret that a lot of caddies on the PGA Tour are pretty good golfers. I love getting them involved in our games when I can. My caddie, Michael Greller, is about a 6 or 7-handicap, which is solid considering he hardly ever plays when we’re on the road; and he’s busy with his young family when he’s home. Say it’s a Tuesday or Wednesday practice round, and our group has a friendly wager, we’ll play that if a player misses a birdie putt, his caddie gets to try the same putt. So if I miss and Michael makes, that counts as a birdie for our team. It’s a fun role reversal and, of course, we split the winnings.

First and foremost, what matters is where the putter is aimed. Without near-perfect aim, I don’t think anyone could slip into blackout, even by accident. I set the putter down first with my right hand only. As I aim the face and look at my line, my feet settle into position. This is a point worth stressing: my body accommodates the putter’s position, never the other way around. Then I put my left hand on, beneath my right, to take a cross-handed grip. Everything should feel balanced, my weight distributed evenly in my feet and my shoulders level. I might take a couple of practice strokes, or I might not. What I always do is a little forward press – rocking  the handle just slightly towards the target – to start my stroke. That press is my trigger, my cue, to let the darkness take over. When I walk around a practice green on the PGA Tour, I can usually tell right away who’s putting great. You can see everything in the finish. Guys who are putting awesome accelerate through the ball, so the putterhead and the lead shoulder finish low and forward. Even on soft, short putts, an assertive stroke is immediately recognisable. On the other hand, guys who are just hoping to make putts tend to let the putterhead and front shoulder rise after impact. It’s like you can see them backing up to watch, curious about where the ball goes. A strong, low finish with the putterhead isn’t something I think about during my stroke; it’s just a universal tendency I’ve noticed among the best. As I said earlier, I don’t think about anything when I’m in blackout. It’s a place where you suddenly arrive after a lot of gradual preparation. Though sometimes none at all.